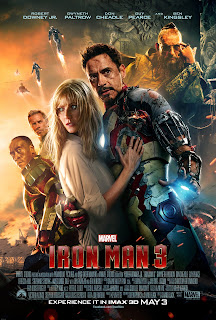 Iron Man 3 has the interesting and difficult challenge of having to be a sequel to two different movies, Iron Man 2 and The Avengers, as well as introducing Marvel Phase Two and having to be the first solo movie after the big epic crossover. It's already enough pressure on it's own, so the fact that the movie has been almost universally anticipated and clamoured for takes director Shane Black (Kiss Kiss Bang Bang) and the rest of the crew to the "Better-Not-F-This-Up" territory.  Thankfully, they didn't F this up. The film is directed by Shane Black and written by him and Drew Pearce (No Heroics) and follows Tony Stark AKA Iron Man (Robert Downey Jr., Less Than Zero) as he suffers from PTSD after the event with his fellow Avengers in New York a year earlier. Building a plethora of Iron Man suits in order to keep himself from panicking and alienating Pepper Potts (Gwyneth Paltrow, Jefferson in Paris) on accident, Stark seems to be close to the breaking point. That is until the mysterious Mandarin (Ben Kingsley, Slipstream) begins terrorizing the US and brings the fight to Stark's literal doorstep. With the resurgence of businessman Aldrich Killian (Guy Pearce, Hunting) and Maya Hansen (Rebecca Hall, The Camomile Lawn) also needing to be dealt with, the ego-bruised Stark finds himself stranded without his tech and forced to rely on his brain, which after dealing with gods and Hulks in New York he feels he can no longer trust. With help from James Rhodes AKA War Machine AKA Iron Patriot (Don Cheadle, Volcano), Stark must once again save the day and become Iron Man.


Nothing's Been the Same

The reason this film succeeds so well is because of the fact that, despite being the first Marvel film since The Avengers, Iron Man 3 relies very heavily on story and it's characters. The film addresses one of Stark's big problems, seeing as how he's teamed with Hulks, gods and super soldiers and he's just a man in a suit and the film is very much an exploration into the fact that Tony Stark is Iron Man and always will be, even if his suits can fly on their own. As a result this is the most personal and the most interesting solo Marvel outing since Captain America: The First Avenger. Which granted was the last solo Marvel outing but you get the point. Downey Jr. does a great job as Stark as always and here he is given more to work with than really any of the other Marvel films he's been in combined. This is Tony Stark's movie and the story he goes through is a great one.

Shane Black does a great job with the rest of the film. The film does a great job at taking liberties with the comic book source material and as a result it leads to one of the best movie twists in a long time... which I will not spoil here. The villains are all great with Kingsley and his partner giving a couple of great over-the-top bad guy performances that are up there with Loki. The action is all great, especially the cool and inventive hand-to-hand combat scenes and of course the big trailer scenes of all of the suits fighting pays off in a big way. Another thing I liked quite a bit was the actual use of Pepper Potts in this film, becoming way more than just a damsel-in-distress. The only real downsides are a few script problems. The film can get a bit heavy-handed at times and there are a few plot-holes and "Yeah, right" moments here and there, but for the most part it's really no big deal.

I would get into more detail, but I don't want to spoil anything, especially on the film's first official day of US release. All you really need to know is that Iron Man 3 is a great sequel and a great movie in it's own right. The best of the Iron Man films, but not as good as The Avengers and it could trump my personal favorite Marvel solo movie Captain America: The First Avenger. The movie is smart, funny, full of great action, tells a personal and strikingly original story and makes great uses of the existing material. You know, everything a sequel should be. Iron Man 3 gets 5 and a half stars out of 6.
Posted by Alex at 5:14 PM