The X-Men Movie Marathon continues with the worst X-Men movie ever! This is X-Men Origins: Wolverine! 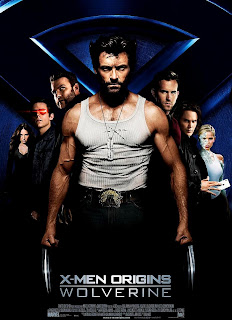 Now, granted, the idea behind this movie is cool. Seeing Wolverine's backstory was potentially interesting. After all, the comic is was based on is very good. So, why did the movie suck so much? The beginning is awesome. I would pay a lot of money to see a movie that follow Wolverine fighting in several wars. But no, instead this is the movie we get.
The "plot" involves "brothers" Wolverine (Hugh Jackman) and Sabertooth (Liev Schreiber) as the join up with William Stryker (Danny Huston) and his team of mutants: John Wraith (Will.i.am), The Blob (Kevin Durand), Agent Zero (Daniel Henney), Bolt (Dominic Monaghan) and "Deadpool" (Ryan Reynolds). Disgusted by Sabertooth's actions on a mission, Wolverine quits and falls in love with Kayla (Lynn Collins). Sabertooth finds them and kills Kayla, causing Wolverine to once again team up with Stryker to take done Sabertooth. Now with his metal claws, Wolverine teams up with con man Gambit (Taylor Kitsch) and goes to take revenge on Sabertooth.

The fact that X-Men Origins fails isn't a terrible surprise. After all, giving the history of one of the most iconic movie/comic-book characters of the last decade is a fairly daunting task. The fact that the movie fails so hard however, is very disappointing. Most of the fan resentment is because of the drastic changes from the comics, most of all with the beloved character Deadpool. Taking away the mouth from the merc with a mouth, especially when talented actor Ryan Reynolds is playing him, is quite possibly one of the most idiotic moves in a film of the last 10 years or so. I get that is was for a joke, but man, it was a terrible joke.
My personal problem with this film is the snail-paced story. Sure, there are a lot of bright and shiny action scenes to keep the kiddies occupied, but the story never really ever gets going. Wolverine wants revenge and... that's about it. An entire movie summed up in three words. There never feels like there is anything really all that important going on. There's no tension. We know the movie will end with Wolverine losing him memories, so what's the point in all of this. If it's not really well made and nothing that happens is going to matter in the long run, what's the point in telling such a huge story. I'm not trying to say that it isn't a good thing to show us what happened in Wolverine past, but if it involves changing major characters, creating large plot holes and is surprisingly dull the whole way through, then why was this the story they chose to tell.
It's also very surprising and a little unnerving to have a film with this big a budget look the shockingly cheap. Wolverine's claws, his main power, look so downright horrendous it seriously makes me wonder if the person the made the effect was fired after the movie was shown. The look like the cheap plastic toys sold at Target. The film has the sorta grainy look too that I think was meant to be stylish but just ends up making you wonder if the fished the camera out of a lake.

Ya, this really is the worst one. It looks laughably cheap, the story is slow and pointless, the action is only decent and it ruins perfectly good characters because this was literally the best story they could come up with for a Wolverine movie. I hope someone got fired over that. Well, maybe that's a little too harsh. I didn't hate this movie. If anything, I mostly feel indifferent about it. Like if this movie didn't exist, the world would be not different. This movie, as sad as it may be, has absolutely nothing to offer of X-Men fans and moviegoers alike. What a waste. X-Men Origins: Wolverine gets 2 stars out of 6.
Posted by Alex at 1:01 PM