"What part of that wasn't rude?" 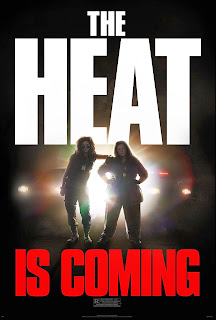 The Heat is a 2013 comedy film that received a 66% approval rating on Rotten Tomatoes and gross $229 million on a $43 million dollar budget. It's directed by Paul Feig (Bridesmaids) and written by Katie Dippold (Parks and Recreations). It follows arrogant FBI agent Ashburn (Sandra Bullock) as she heads to Boston in order to find a drug kingpin who's killing rivals. There, she teams up with loudmouth Boston detective Mullins (Melissa McCarthy) in order to find her bad guy. Along the way, they butt heads with a pair of DEA agents (Dan Bakkedahl and Taran Killam), Mullins's brother (Michael Rapaport) and a fellow FBI agent (Marlon Wayans). Hijinks ensue.

2013 will go down for me as the year comedies could figure out what the hell they were doing. Outside of one or two average comedies (We're the Millers springs to mind), 2013's comedy offering are mostly awful. Seriously. Currently, in my top ten worst of the year, 5 films are comedies, including the top three. And really, there was only two really great ones, with This Is the End and The World's End. Thankfully though, The Heat doesn't disappoint, in a solid, though not great entry in the comedy pool. The Heat is consistently funny, even if it only occasionally hits a home run. And that's kinda the problem with the film as well. What keeps The Heat from being as good as it's apocalyptic counterparts is simply that it isn't nearly s interesting as them. Sure, the film delivers the laughs, but it isn't hilarious. Plus, it falters under the weight of a generic story.

The Same As Before

The Heat has the same basic story that always given to us in crime comedies. There an evil, generic drug dealer with a one word name t our heroes try to thwart. The bad guy has the upper hand thanks to a mole, but eventually the heroes can defeat the bad guys and save the day. Roll credits. And this film largely sticks to that formula with little deviation or originality. The bad guys are all who you'd expect them to be, the people who get hurt are all the people we expect to get hurt and the film wraps up in the way we expect it to wrap up. It's about as by-the-numbers as it gets and without the originality or trope aversions the film fails to get some great laughs out of it's story. Sure, it gives us some good ones and the characters more than make up for it, but it needs more. And unfortunately, the story ain't helping. Plus, the characters are as well-defined as they could be. McCarthy is great and Mullins is a good characters, with a strong backstory and interesting quirks, but Bullock is stuck being the uptight one. Her backstory is as dull as it comes and even when she finally loosens up in the third act, she's still not that much fun.

The Heat is a funny movie and a big step up from the other comedies of 2013, but it isn't one that will stay with you that long. Despite a game cast, funny characters and a well-written script, the film's story is entirely made of cliches and buddy cop movie tropes. The plot can be solved in a matter of minutes if you've ever watched any comedy ever and Bullock's character is never made as interesting as McCarthy's. And while the film does deliver on the humor, the story keeps it from being truly great. The show feels like a sitcom almost. A funny sitcom, but still a sitcom. The Heat gets 5 stars out of 6.
Posted by Alex at 1:05 PM