The Undefined Gamer: "The Day of the Doctor" Review

Cinema Won here. I love Doctor Who, but
I'm only on Season Four. Editing this spoiler-free
was the worst thing ever. 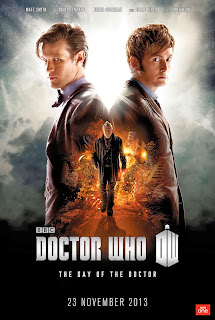 What can I say about this? Fantastic, simply fantastic.
To commemorate 50 years of Doctor Who, The Doctor revisits The Time War. Embarking on a journey with the true 9th Doctor (John Hurt), the 11th Doctor (David Tennant), the now 12th Doctor (Matt Smith) must not only unravel a plot by the Zygons, a classic DW villain whose home was lost in The Time War, but also save Gallifrey itself from total annihilation.
Though this should come as no surprise to fans as it was mentions before that Gallifrey was stuck in a fixed moment in time (during the last Master episode), how they actually go about this is amazing.
The production qualities have been raised even higher for this event, and nods to the series are abundant. Despite Steven Moffat denying this to be solely a two/three doctor adventure, all 13 Doctors make cameo appearances (yes, even Capaldi), during an epic scene where all 13 TARDISs are surrounding Gallifrey. Obviouslys, Hartnell, Troughton, and Eccleston where not able to attend, but you wouldn't get that had you came in oblivious to the fact that Troughton and Hartnell are dead, and Eccleston refused (though the episode does feature a never-before seen soundbite that Eccleston may have provided for the 50th). The 4th Doctor (Tom Baker) even manages to squeeze in a meaningful cameo in addition to the "13 Doctors" scene described above, chatting with Matt Smith.
What is in particularly shocking is that this episode is able to clear up every single inconsistency in the show. Sure, there are a few plotholes here and there, but its impossible to make a meaningful 50th anniversary episode without some Timey Whimey bullshit here and there. The episode even explains why the Doctor always stays and helps people, when he could easily just run, as it is part of the promise he made when he decided to call himself "Doctor."
It is a little concerning when 11 and 12 finally accept Hurt as the true 9th Doctor, as this can make it very unclear as to when the Valyard will come in (a character that can see endless usage in future seasons).
The three main Doctors (Hurt, Tennant, and Smith) have great chemistry together, and in addition to being brilliant, are downright hilarious.
A special crafted with love and care, the 50th is an event not only lovers of Doctor Who must see, but any lover of television should see as well. I wouldn't change a thing about it. Simply brilliant.
This episode could've just been used to mark a milestone, with subtle nods scattered throughout. It did more than that. At 1:20 minutes, this special technically can still count as a TV episode. I have never seen another show accomplish so much in so little time.

Email ThisBlogThis!Share to TwitterShare to FacebookShare to Pinterest
Labels: BBC, Doctor Who, Sci-Fi, The Day of the Doctor, The Undefined Gamer, TV Movie, TV Special